Spurs signed the 26-year-old Brazilian from Paris St-Germain for £25million in January, since when he has only started four Premier League matches for Pochettino’s team. 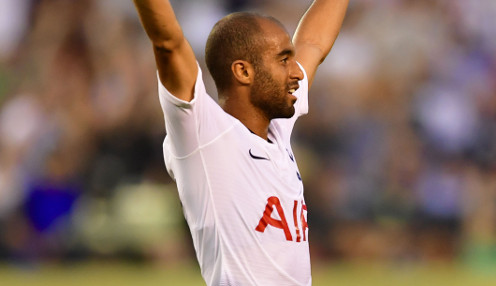 He was in the starting line-up for the victories at Newcastle United and at home to Fulham though and made it three in a row at Manchester United on Monday.

Moura, who scored in the 3-1 victory against the Cottagers at Wembley, scored another two against Man Utd in what was a very impressive and comfortable win for Spurs who won 3-0 on the night at Old Trafford. Before this victory, Spurs had won only one of 12 league games against the so-called ‘big six’ since beating Manchester City in February 2016.

Tottenham manager Mauricio Pochettino said after the match: “It is a massive victory for us and I am very proud of the performance. “It is difficult to beat Manchester United at Old Trafford. They were better in the first half but we dominated from then on, and the clean sheet was a bonus.

Before the match Pochettino remarked that  “He still needs to prove [himself],” of Moura.

“He did well in pre-season but remember eight months ago when he arrived I told you, ‘Careful, calm, relax – if he helps in the first few months then perfect, if not then he needs to adapt to a different reality, different club, different everything’.

“It is difficult for a player to arrive in January and show you quality. The team works and you find your place, you believe and you expect to play straight away and then you need to wait and that is so complicated.

“But what is most important is to have the possibility to show me that they deserve to play. I am happy that he scored because I am sure he will have more confidence in the future.”

Spurs, who have failed to win their last four matches at Old Trafford under Pochettino, are 4/9 to finish in the top four this season, while United are available at 7/4.

Odds24 is the premier sports betting news site,. find out more about us here