Horse Racing is a worldwide sport and the races has evolved to make it more exciting for punters and the viewing public. To understand the sport and betting then you would be wise to learn about the different types of horse racing that is very interesting, 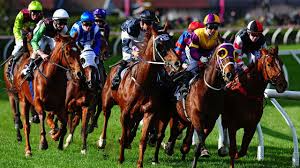 Horse racing has its origins in ancient Greece and parts of the North Africa east and began as chariot racing and evolved to the spectacle it is today. It is undoubtedly the oldest living sport today in existence. In the UK horseracing is thoroughbred racing became, and remains, popular with the aristocrats and royalty of British society, earning it the title “Sport of Kings” .

This guide is here to help you understand the different terms used in racing and also some background explanation of some key words of phrases used. As a direct result of the popularity a whole service industry has grown up around it from betting tips to a results service to betting calculators where you can determine the outcome before you place bets and if that’s not enough for you then how about virtual horse racing !

Types of Breeds of Horses:

In most horse races, entry is restricted to certain breeds. Horses must have a sire (father) and a dam (mother) who are studbook-approved individuals of whatever breed is racing. Pedigrees of stallions are recorded in various books and websites, such as Weatherbys Stallion Book, the Australian Stud Book and Thoroughbred Heritage.

There are lots of horse racing bet types and here are the most common in the UK:

WIN – easy and simple to understand – just select a name of a horse to win the race. If it comes in then great you win !

PLACE – also called an each-way bet reduces the risk as the selected horse will generally finish in the top three. For this bet you’ll get about one-third of the odds if it finishes 2nd or 3rd but you’ll also get 25% more if the horse finishes 1st. For this you will have to pay a premium for the privilege and is best suited where the number of horses are more than about 10 or so as the chances if selecting a winning horse are greater.

SHOW – you select a horse that you think will come in the third place and If the finishes in the first, second or third, you’ll win the bet. The pay-out for a show  bet is much less than a place or win bet since you have a higher chance of winning.

EXACTA – better odds but higher risk where you will try to predict a horse to finish 1st and 2nd. So if you say numbers 5 & 3 and horse 5 must come first and 3 must come 2nd in order for you to win the bet.

EXACTA BOX – is a variation on the above except you win when your selections finish in the top two in any order.

TRIFECTA – so now it’s the risk and return are higher. it’s taking the exacta bet to the next level by you having to predict the correct order of the first three-horse in the exact order.

SUPERFECTA – OK so now if you’re wanting a bumper return then this is for you. This is taking the trifecta bet and adding a fourth horse to the bet, so now you must predict all four horses to finish in the precise order.  To increase your chances you may want to do a few of these bets in different combinations.

SUPERFECTA BOX – As above but reduce the risks a little. This time your four selections can finish in any order. May be preferable to a straight superfecta.

DOUBLE – the 2nd simplest bet where you select two horses (of any event) from separate races and combine it into one bet. This is pretty popular where you want to select favourites from two races and get a better return.

PICK 3/PICK4/PICK6 – this is very similar to the double except you select from multiple races, Clearly the more you choose the higher the odds as the risk increases. These types of bets are also popular with many punters. 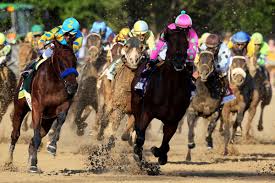 The US Triple Crown of Thoroughbred Racing at the Kentucky Derby held every year on the first Saturday in May, and has been going since 1875.

The race is over  is just 1-1/4 miles and is called the “Greatest 2 Minutes in Sports.”.  The winner is draped in blanket of roses and is also called “The Run for the Roses” .

Is also simple known as the Arc, is one of Europe’s biggest horse-racing events. Spectators fill the grandstand the 1st Sunday of October at Longchamp Racecourse on the banks of the Seine, It has one of of he highest prizes in the racing world due to its connection with Qatar Racing and Equestrian Club. The atmosphere is a real french affair with Champagne and jazz. 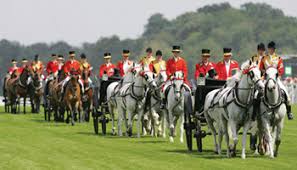 Has been part of British Society and tradition since 1711 with plenty of pomp with the Royal family attending all of the event’s races and you are expected to dress the part.

Depending in where you sit there is a strict and enforced dress code so no jeans and t-shirts allowed.

The week-long of race days includes Ladies Day on the Thursday and receives plenty of attention for its glamour as much as the races.

A relative newcomer on the horse-racing scene, the Dubai World Cup first put the United Arab Emirates on the horse racing map in 1996. It’s the richest horse race in the world with a purse of $10 million for the lucky winner. Watch the race from the swanky grandstand or on an extravagant room or suite at the world’s first track-side hotel.

A different kind of horse-racing experience with a pack of horses competing along a 4-mile course studded with 30 fences. on a national hunt course. with the most famous jumps in the world including the infamous Beeches Brook due to its sheer drop.

The festival runs over three days but the main event is always on the final day where the majority of people place bets.

This is one event that receives attention for the actual race itself. In the UK the only talk of the day is all about the big race and it brings out the once a year armchair spectator.