The Reds are the only team to have beaten Pep Guardiola’s side in the Premier League this season and Klopp is keen to play in a similar style in the first leg on Wednesday.

“The way we attack the opponent, the way we defend high is unpleasant (for our opponents). If we do that well they will have some difficulty coping with it,” said the German.

“It will be very exciting. There’s no guarantee this will work. In the end it’s the lads on the pitch who will decide the game.” 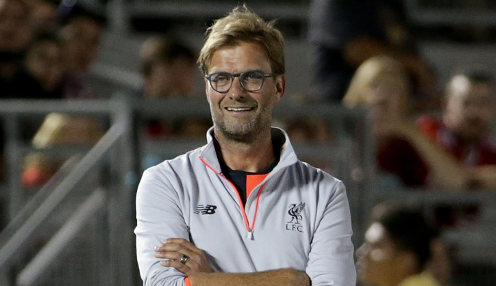 Mo Salah, Roberto Firmino and Sadio Mane all scored in January when Liverpool held on to beat City 4-3 and Klopp believes the attacking trio will be key to Wednesday’s encounter.

He added: “It will be about doing more things right than the opponents, because you can’t simply defend against City and hope that they won’t score on the day. They’re just too good.”

Klopp and Guardiola locked horns in the Bundesliga when they were the managers of Borussia Dortmund and Bayern Munich, 7/2 to win the Champions League this season.

Klopp said of his rivalry with the City boss: “Pep has always had better teams than me. You can see that now with Manchester City – they have a lot more points than we do. However, that difference has never been as small as it is now. When we coached at Bayern and Dortmund respectively, that difference was really big.”

Meanwhile, Sergio Aguero will miss the Anfield game with a knee injury while Liverpool have said that Joel Matip is out for the rest of the season with a thigh problem that is likely to require surgery.

Salah is 6/5 to score at any time in the match.