Will Brazil striker Neymar be fit to play in the next World Cup match ?

Brazil have played down concerns Neymar has suffered a fresh injury after the forward limped out of training on Tuesday.

The Paris Saint-Germain star was spotted wincing in pain as he took part in a training exercise at the Selecao’s base in Sochi and eventually left the session early.

The fitness of Neymar has been a constant concern for Brazilians since he fractured a metatarsal while in action for PSG in February, ruling him out for the remainder of the domestic season. 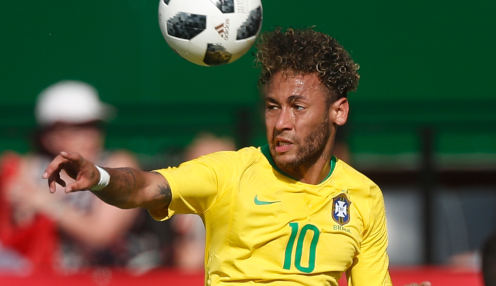 The 26-year-old had looked sharp in Brazil’s two warm-up games before they went to Russia but was far from his best in Sunday’s Group E clash with Switzerland.

Neymar became the most fouled player in finals history against the Swiss, winning 10 free kicks, and left the Rostov Arena limping.

Having tried to take part in training on Tuesday, only to then be lead away by medical staff, the Brazilian Football Association felt the need to put out a statement confirming Neymar had “complained of ankle pains due to the number of fouls suffered against Switzerland” but that the injury was not serious.

Neymar is expected to be at training on Wednesday as Brazil build-up to their second match of the 2018 World Cup against Costa Rica and the world’s most expensive player is 18/1 to win the Golden Boot.

The South American powerhouses find themselves second in Group E, behind Serbia, after being held to a 1-1 draw by Switzerland and they are now 4/7 to win the pool.

Brazil are 2/9 to pick up their first win of the tournament on Friday afternoon, while Costa Rica are 18/1 and the draw is 11/2.

William Hill is a world leading bookmaker. We’ve put together a handy review plus a few others here