Kell Brook does not think Amir Khan wants to fight him next but vowed to “do some damage” if they ever meet in the ring.

Kell Brook was in attendance at the Liverpool Arena on Saturday night as Khan marked his return to boxing following a near two-year absence with an impressive 40-second stoppage of Phil Lo Greco.

Amir Khan claimed afterwards that he had joined up with Brook’s promoter Eddie Hearn at Matchroom Boxing to get closer to him with a view to a showdown.

I don’t think he fancies it. He can see in my eyes that I’m a possessed man. I’m hungry for blood. He knows that I’m coming to bring it. I’m no Lo Greco, I’m the Special One. 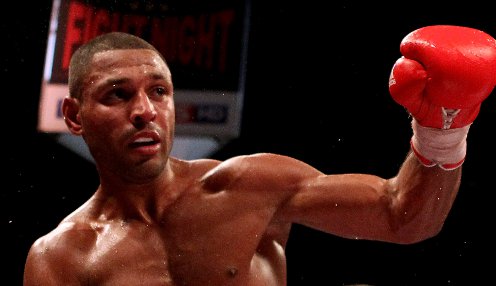 However, Brook insisted that when they were stood together in the ring, Khan’s body language was not telling him he wanted a fight in the future.

“He didn’t have any eye contact with me when I got into the ring,” the 31-year-old former IBF welterweight champion told Sky Sports. “He said ‘I only signed with Eddie [Hearn] to get the fight with you, I’m running to you’, and then he turned around and ran away!

Brook added: “I don’t think he fancies it. He can see in my eyes that I’m a possessed man. I’m hungry for blood. He knows that I’m coming to bring it. I’m no Lo Greco, I’m the Special One.

“I’m going in there to do some damage.”

The main obstacle is that former unified light-welterweight world champion, Khan, is keen to press on and win a world title at welterweight, while Brook has moved up another division to light middleweight.

However, Brook suggested that a fight at a catchweight of 150lbs could be agreed on given that Khan fought Le Greco at that weight on Saturday.

And, when asked further on his thoughts about a possible bout with Khan, the Sheffield fighter said: “It would be a dream to box at Wembley. I’m sure he’d love that the same way as me. When our careers are over it is going to be great to look back and tick that box.

“It would be bigger than Bramall Lane, I have to say that. Fighting down at Wembley in front of all those people, it doesn’t get any bigger.”

Meanwhile, David Haye and Tony Bellew’s eagerly-awaited heavyweight rematch is approaching on 5th May at London’s O2 Arena with Haye 4/9 to avenge his defeat last year while Bellew is priced at 15/8 to emulate his victory.